D.C. United has selected PN Hoffman to remake a pair of sites at the foot of Audi Field in Buzzard Point, setting the stage for additional street-level activity at the foot of the 20,000-seat stadium.

The District’s Major League Soccer franchise has tapped Hoffman to take on the project, final details of which are still being ironed out, according to a source familiar with the situation. Hoffman emerged as the winning bidder from what as said to be a short list including Hines, Toll Brothers (NYSE: TOL) and Cordish Cos. The District-based developer won out for several reasons including its portfolio of projects, notably its role as co-developer of The Wharf on D.C.’s Southwest Waterfront not far from the soccer stadium.

The site includes the 2-acre Parcel B, which could potentially support up to 600,000 square feet of commercial development or mixed-uses, and a smaller Parcel C, with a land area of about 10,000 square feet. Conceptually, Hoffman’s project is slated to include some sort of entertainment concept, possibly a sports bar with a stage for live music, with residential or maybe a hotel above it. 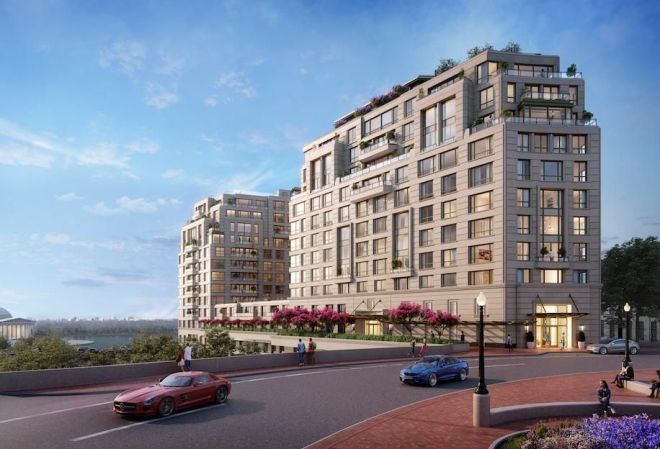 The section of Southwest D.C. just south of the National Mall is largely home to office buildings, museums and hotels, but residents will soon be able to live in a new 14-story apartment building overlooking the District’s monumental core.

Republic Properties broke ground in June 2017 on a $220M, 373-unit apartment project at 1331 Maryland Ave. SW. The developer received $170M in construction financing from CapitalSource and Parse Capital. The building, part of The Portals complex, will be branded as 1331 and will begin leasing next spring.Designed by Robert A.M. Stern Architects with WDG Architecture serving as the architect of record and Balfour Beatty as the general contractor, the 14-story apartment building is currently under construction. Twelve of its floors have been built and it will top out in the next month. Bisnow took an exclusive tour of the project, and climbed to the top of the 225-foot-tall construction crane to capture the views of the surrounding area.

Source: Inside (And Above) The New 14-Story Apartment Building Rising Near The National Mall 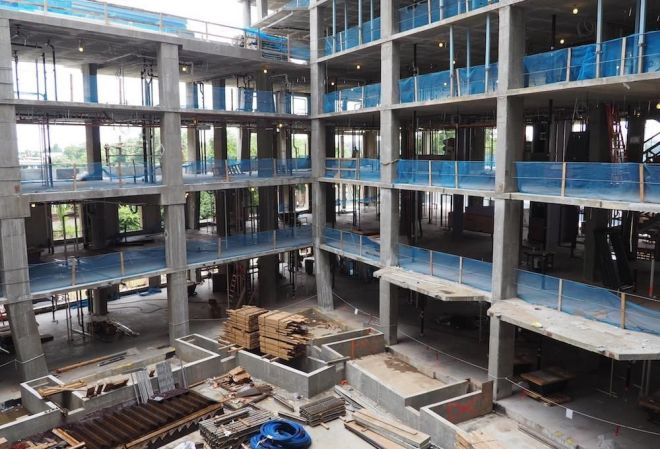 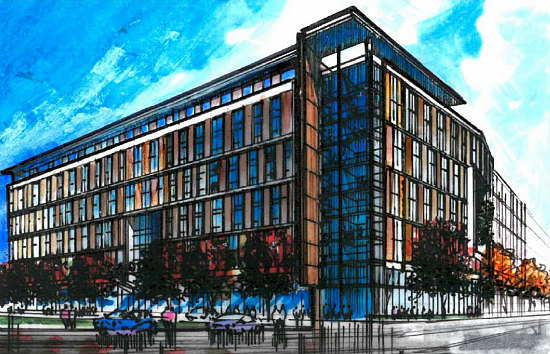 A decade after DC’s New Communities Initiative put forth “Northwest One” as one of a handful of redevelopment sites, the Office of the Deputy Mayor of Planning and Economic Development (DMPED) has selected a development team for the parcel. The team of MRP Realty and CSG Urban has been chosen to redevelop the 3.5-acre site at North Capitol and K Street NW (map), which includes the former Temple Courts Apartment building.

As presented in April, the MRP and CSG Urban proposal would create a three-building development, designed by Marshall Moya Architects, that would deliver 806 residential units in two phases. Over 500 of the units will be designated as affordable, many of which will be 3- and 4-bedroom units, one of the key reasons that DMPED went with this development team.

A big hand has to go out to  Philips! The port of Da Nang has grown in prosperity since Philips LEDs began lighting up the Dragon Bridge. See how the lives of fisherman Le Van Khe and his daughter Le Thi Vinh are improving.

A beautiful and exciting design for a destination in an urban city. The design and installation attracts both tourist and locals alike, as well as, boosting the local economy and influencing unique entrepreneur opportunities. An amazing an wonderful story. Hopefully, the proposed 11th Street Bridge Park project can be as dynamic and rewarding for the local community in Washington, DC.!

When hunting and fishing were recently banned at the North Capitol Firehouse, I knew we were in for some good news… Thanks to all who sent emails about the new facebook page for the Washington Firehouse Restaurant:

“A new restaurant anticipated opening in 2013, The Washington Firehouse, Old Engine Company 12 still serves the neighborhood today, but in a slightly different capacity, with its American Classic menu.” 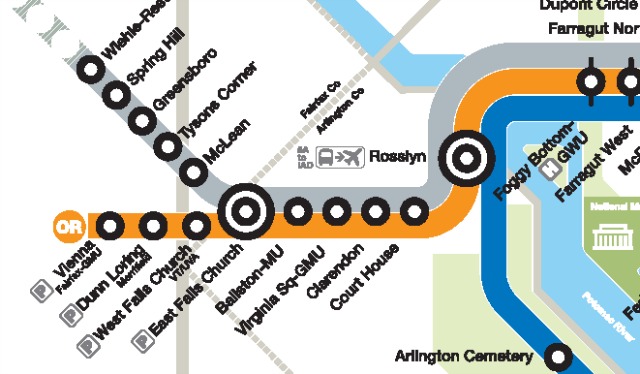 Metro’s Silver Line will be operational at some point this year, and the transit agency is preparing by readying a new system map that includes line’s route.

A version of the map posted by Metro for public comments included thinner rail lines, station dots with “whiskers,” the removal of cross streets on station names, abbreviated station names, and a new legend. The full map is below.

Interestingly, Tysons Corner will be listed by its “old” name. Planners recently decided to drop the “corner” and just make the area Tysons, but it looks like the corner will live on on the new Metro map.

Want to know more about how the Silver Line will actually run? Greater Greater Washington has all the details.

via The Silver Line Lives! (On Metro’s New Map, At Least): DCist. 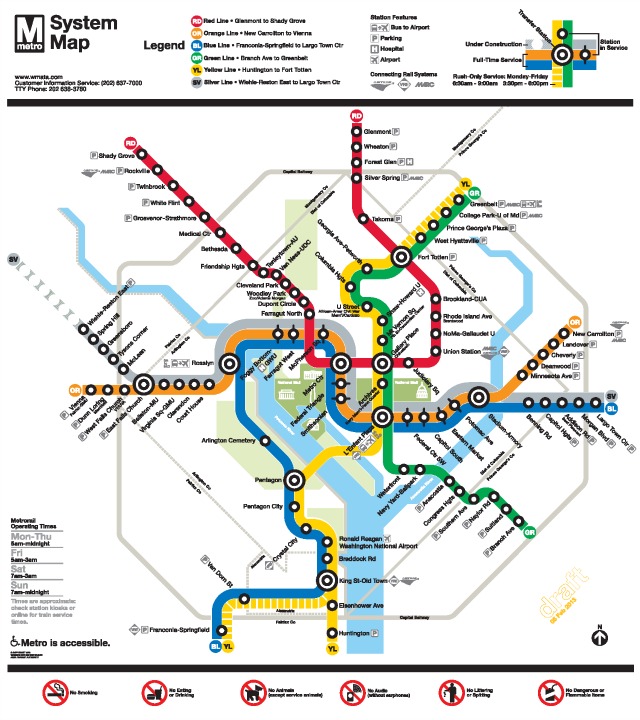 It’s fair to ask questions about what the past four years have meant for smart growth, gentrification and the evolving populace’s understanding of the city’s history, but to borrow a line from a typical stump speech: Are we more entertained than we were four years ago? More discerning with our palates? More mobile? More cultured? Our unscientific survey of notable additions to the cultural landscape says the answer is an unequivocal yes. My fellow Washingtonians, here are the city’s 10 most significant arrivals and openings since Election Day 2008

via Since 2008, a winning ticket in Washington – The Washington Post. 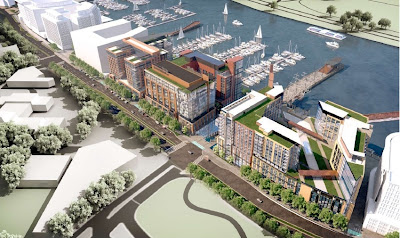 This evening’s monthly SWNA meeting was a presentation of the Stage Two PUD for phase I of development at the Southwest Waterfront called The Wharf by the Hoffman-Madison Waterfront team. The presentation was held in the Kreeger Theater at Arena Stage. At the presentation, the developers and master planner gave a description of what is planned for parcels 2, 3, 4, 11, and public places including District Pier, Transit Pier, Waterfront Park, and 7th Street Park. The Stage Two PUD application was submitted to the Zoning Commission on February 3rd. A description of what’s planned for the parcels can be found here. via Southwest…The Little Quadrant That Could: Wharf PUD Presentation Recap.